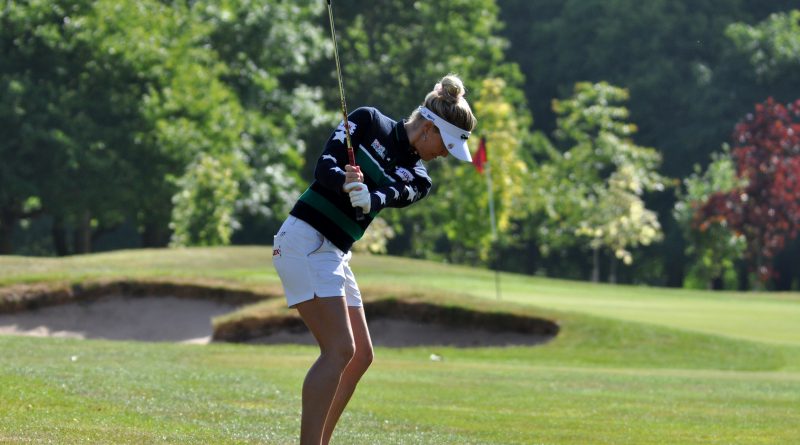 World golf star Charley Hull is relishing the opportunity to return to competitive action but doesn’t expect to do so on the LPGA or Ladies European Tour until August at the earliest.

The 24-year-old, who has spent the last few weeks practising on the course at Wellingborough after joining the club in the post-lockdown period, says it’s been a frustrating time.

Hull said: “I did a little bit of practice in my garden, and did a bit of housework. It was nice to spend some time at home, but obviously with the restrictions you can’t see anyone, so it was a bit annoying. My mum and dad came into the garden, but that was all.

“It was nice to hit that first tee shot at Wellingborough, I can’t remember where it went but it was just good to be back on a golf course. I’m looking forward to my first tournament, I can’t wait to get out there.

“We had a Skype meeting the other week, and another tournament has been cancelled. I think August time is the start, probably in Europe with the British and Scottish Opens, but I’m not 100% sure – you just can’t tell.

“I’m aiming at August as being my start of the season. In theory I can play through the winter in America and Asia, but I’m not sure if we will be able to go to Asia.”

Hull may decide to join fellow Wellingborough professional Meghan MacLaren in putting her name down for a Women’s Open at Brokenhurst Manor Golf Club in Hampshire on June 18.

The one-day competition, which has been touted as the first women’s sporting professional event since the Covid-19 lockdown, looks set to include 2018 Women’s British Open Champion Georgia Hall and could be televised.

Ladies European Tour professional Liz Young, who is co-organising the event with home club pro Jason MacNiven, said: “We wanted to find a way to put on a tournament for women’s professionals.

“We want to be competitive again and have the chance to earn a little money in these uncertain times and to boost the profile of the women’s game.

“It would also be an opportunity for people who are new to women’s golf to see just how good our game is. That is why it would be amazing if we could get this on television. I know people would love to watch live sport.”