Northamptonshire’s Charlie Salter and Max Hayward relished the opportunity to compete against some of the best young golfers in the world as they both enjoyed high finishes in the Faldo Series Grand Final in UAE.
Competing on the magnificent course at Al Ain Equestrian Shooting & Golf Club, Salter recovered brilliantly from an opening score of 77 as he fired rounds of 68 and 71 to finish fifth in the Boys Under-18s age group.
Although Northants County’s Salter also played in the Grand Final 12 months earlier, it was a unique experience for Hayward as the Staverton Park teenager took sixth spot on debut in the Boys Under-16s category with scores of 72, 75 and 72.
Chinese Taipei’s Ting-Yu Chen was crowned Faldo Series Boys Champion after posting rounds of 70, 65 and 68, while the Girls title went to England’s Emily Brennan.
Sir Nick Faldo, who was in attendance at the Grand Final, said: “I loved the week and have been hugely impressed with the golf.
“The whole basis for the Faldo Series is to enable juniors to learn vital skills and emulate the top level of golf.
“It’s been a fantastic year for the Faldo Series, and the standard of this week’s golf epitomised that.” 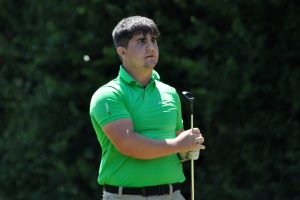