Overstone
Ryan Genner couldn’t quite match the brilliance of Jay Vierya in the January White Tee Stableford at Overstone Park as the scratch team player’s tally of 41 points left one behind the 15-handicapper.
Forty one points was enough for Roy Stanton to claim top spot in the January Yellow Tee Midweek Stableford as he finished two ahead of David Lawrence.

Northampton
Ben Lavender and Katie Amos have been appointed the new junior captains at Northampton after driving in with a nine-hole greensomes competition that featured over 30 junior golfers.
Sophie Copson and Henry Edwards were named as their Vice Captains (photo credit: Dennis Tyrrell). 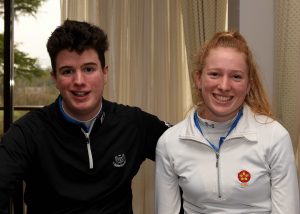 Collingtree Park
Forty one points was the winning score in the fifth round of the Seniors Winter Stableford at Collingtree Park as Arthur Johnson found his form.
High-handicapper John Coker was also in great touch but his tally of 40 points was only good enough for second place as he finished one clear of Keith Threlfall and Nigel Deering.

Hellidon Lakes
The 11th and 12th rounds of the Winter Merit League saw contrasting victories for Mike Weaving and David Bevan respectively at Hellidon Lakes.
High-handicapper Weaving needed to be at his very best to get the better of Keith Meadham on countback after both men carded a magnificent total of 41 points.
It was a slightly different story for Bevan a week later as his total of 39 points was more than sufficient to secure top spot as he finished three ahead of Ted Craig and Stuart Metcalf.

Daventry
James Berry was the only player to match his handicap in the latest Winter Stableford at Daventry as his score of 36 points lifted him two ahead of Trevor Calvert and Jayme Rush.