Oundle have reached the semi-finals after guaranteeing top spot in Group B with one match still to play after recording a 7-0 home whitewash against Cold Ashby.
With Rushden ending Peterborough Milton’s hopes earlier in the week with a narrow away win, Oundle took full advantage as Pat Silburn, Geraldine Robson, Karen Johnson, Ann Ireland, Elizabeth Swan, Sheila Homer and Carla Fogarty bagged the points.
Northampton saw their hopes of reaching the last four come to an end in Group A as they lost 5-2 at Wellingborough, who can still qualify for the semi-finals.
The hosts seized control as Emma Maziak and Ida Jane Huggins took the opening two games on the 17th hole.
Geraldine Morris and Helen Brownless replied for Northampton, but it proved too late as Jackie Banks, Bina Shah and Valerie Cooke secured the win for Wellingborough, who will top the group if they beat Staverton by the same scoreline this week.
Northants County and Whittlebury Park finished top of Groups C and D respectively as they both finished with the leading record of three wins out of four matches. 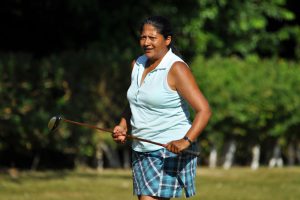