Northamptonshire capped a fantastic year by winning the Midlands Seniors Team Championships for the first time with a 9-3 victory over Worcestershire in the final at Henlle Park GC.
After clinching the East Midlands League to set up the showpiece match with the West Midlands League winners, the county made a slow start as Worcestershire took the first game with a 5&4 success.
Northamptonshire didn’t panic however as Alan Freeman and Alan Wrigley levelled the scores with a 3&2 win, before Brian O’Connell and Jim Tricklebank strolled in with a 5&4 victory under their belts.
With the other three ties going the distance, Northants quickly settled the contest as Greg Shelton and Dominic Jessup took game one, before Howard Boylan rolled in a four-footer on the 17th to guarantee victory alongside Mike Burnhope.
Roger Butler and Alistair Heslop wrapped up the perfect day, and season, for the Northamptonshire seniors, who also lifted the Anglian League, as they halved the remaining match.
Seniors Team Captain Wrigley said: “A huge thanks to the team and everyone who contributed to this season, a first for Northamptonshire County Seniors.
“We now look forward to reflecting on an excellent season and begin to build and strengthen the team for the 2019 season.” 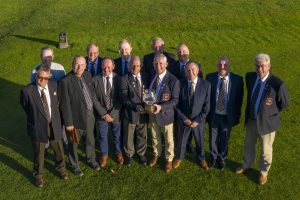