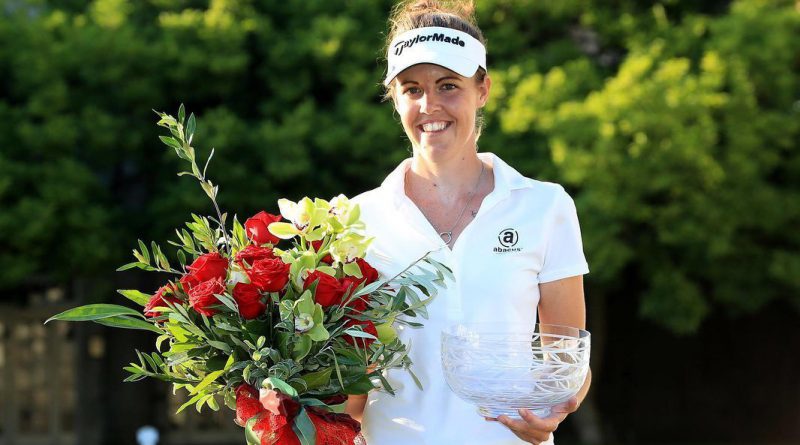 Northamptonshire professionals made it back-to-back victories on the new 2020 Rose Ladies Series as Meghan MacLaren followed in the footsteps of Charley Hull by winning the second event by two shots at Moor Park.

With Hull coming out on top at Brokenhurst Manor a week earlier, fellow Wellingborough pro MacLaren matched that achievement with an excellent round of three-under-par 69.

A birdie on the opening hole set the tone for the two-time winner on the Ladies European Tour as she raced to the turn in five-under-par, before adding another birdie on the 10th hole to move further clear of the chasing pack.

Although a double bogey on the 11th, when she collected a penalty for playing the wrong ball, and bogeys on the next two holes threatened to derail her challenge, the 26-year-old bounced back with a birdie at the 15th, before parring her way to victory.

Solheim Cup star Hull, meanwhile, was unable to find her consistent best until the last half a dozen holes as she compiled a one-over-par 73 to finish in a tie for seventh place.

On a remarkable day when she played in a charity Pro-Am at Worplesdon earlier in the morning, Hull had to wait until the 12th hole before carding her first par as she traded birdies with bogeys, before eventually settling down over the closing stretch.

With top male pro Justin Rose and his wife Kate backing the series of events, MacLaren says all the players are making the most of the opportunity to play competitively for the first time since the coronavirus outbreak.

She said: “I think everybody felt a bit more comfortable this week. We were thrown in at the deep end last week, because the course was really tough, and this one was tough as well, but you start to get your edge back, bit by bit.

“It’s just nice. We all enjoy being here and you see the same faces, so it’s a really enjoyable atmosphere.

“For someone like Justin Rose to come out and sponsor this and say the things that he did and just give us some respect, it’s meant the world to all of us.

“To turn that into action is something that we will all be grateful for, for a very long time. Just getting to play, it’s nice to be out here again.”

The tournament capped another memorable week for MacLaren as she cemented her status as one of the leading women in European golf with her actions both and off the golf course.

At the start of the week, she showed her capabilities whilst taking on the men on the Clutch Pro Tour by grabbing back-to-back eagles on par five holes at Sandwell Park to finish eighth with a score of 73.

MacLaren then turned her attention to promoting the game as she played a key role in the relaunch of the Ladies European Tour by writing the script for a new promotional video, narrated by Solheim Cup winner Suzann Pettersen.

After joining up with the LPGA a few months ago, the LET has initiated a fresh logo, new website and tag line, #RaiseOurGame, as they look to inspire women and girls to pursue their passion and realise their potential through the game of golf.

MacLaren said: “I’ve always thought that golf fans across the world – those who watch the European Tour and the PGA Tour – could, and would, be fans of the LET, too.