Charlie Salter (Northants County) and Max Hayward (Staverton Park) will be aiming to follow in some illustrious footsteps when they compete in the Faldo Series Europe Grand Final at the Al Ain Equestrian, Shooting & Golf Club in UAE.
Salter, who also took part in the Grand Final 12 months ago, will be competing in the under-18s category, while Hayward is playing in the under-16s section on November 26th-28th.
With previous boys winners including Rory McIlroy, Nick Dougherty, Ollie Fisher and recent British Masters winner Eddie Pepperell, the duo will go head-to-head with young golfers from 20 countries across the world.
The winner of each age category (three boys and two girls) go through to the 2019 Asia Grand Final in March in Vietnam, while Sir Nick Faldo will also arrange for the overall boy and girl champions to play in a professional Tour event. 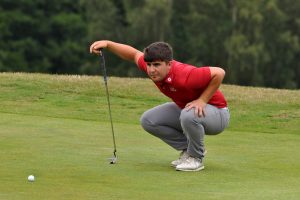