Northamptonshire relished their status as pre-tournament favourites in the 2019 Midlands Boys Team Championships as they beat all the other nine counties to the top prize at Robin Hood GC, Warwickshire.
Despite Josh Pritchett coming in as a late replacement for Max Hayward, the county line-up of Joseph Quinn, Corey Neville, Owen Watts, Harry Oddy and Luis Witherall trailed by just three shots from the hosts following an opening round of 375.
With Warwickshire dropping off the pace in the afternoon, Northants maintained their form to hold off the strong challenge of Lincolnshire by a single stroke with a team score of 752.
Both Quinn and Neville were also in the running for the individual prize with scores of 146 and 147, but they had to settle for third and fourth respectively as Sam Allen (Notts) and Rhys Wallace (Warwickshire) compiled the joint-best total. 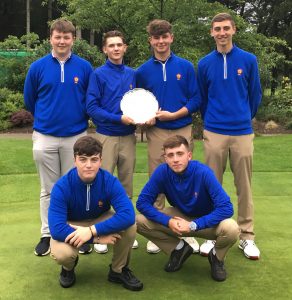