Alan Wrigley (Northants County) lifted the 2018 Seniors County Championship Trophy with a thrilling two stroke victory from three players on his home course.
The five-handicapper produced his best when it mattered as he completed the last seven holes in gross three-under-par to grab the honours with a 76.
Despite carding eight on the first hole, Northampton’s David Dare battled back to grab second on countback, plus the net prize, as he finished with a couple of birdie twos on the back nine and an eagle three on the 18th.
Former champion Richard Cole (Peterborough Milton) birdied the last hole to take third ahead of County’s Alan Brown, who couldn’t maintain his momentum after twice carding back-to-back birdies on the outward stretch.
The gross and net team competitions went to Peterborough Milton and Northampton respectively, while Brown, Ian Smith and Ted Dunn (both Milton) collected age group awards. 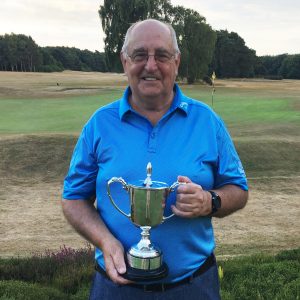