Ashleigh Critchley added another title to her growing collection as she won the Scottish Girls Under-14 Open Championship with a stunning eight-shot victory over 36 holes at Murrayfield GC.
After becoming England’s most improved girl golfer by lifting the Abraham Trophy earlier in the month, Critchley broke the course record on day one with a brilliant five-under-par gross 68.
In more difficult weather conditions, the 13-year-old maintained her composure with a level par 73 as she finished eight clear of the winner of the Under-16 competition.
Critchley, whose handicap has dropped to two, said: “It feels really good to get the win, it was a great event to play in here at Murrayfield. I struck the ball really well both days and delighted with my score.” 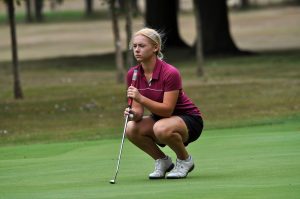