Northamptonshire Men’s team lifted the Anglian League crown for the fourth time in county history with a stunning 8½-3½ away win against Cambridgeshire at St. Ives GC.
The success was built around a magnificent morning display as Michael Farr and Mikey Chambers (2&1), Callum Farr and Lee Hitchcock (3&1), Luis Witherall and Charlie Salter (one hole), Liam McNeela and Miles Mudge (two holes) bagged wins.
Any fears of a home comeback were quickly erased when Chambers and Michael Farr recorded huge early wins in the singles, before Charlie Salter, who qualified for the Faldo Series Grand Final earlier in the week, sealed victory on the 18th hole.
With Callum Farr and Mudge adding a win and a draw respectively, Northamptonshire’s first Anglian League crown since 2011 was confirmed when news filtered through of an away defeat for overnight leaders Leicestershire at Suffolk.
Northamptonshire’s second team, who had lost their previous four outings, ended a disappointing campaign on a high as they thrashed Cambridgeshire 9-3 in the reverse fixture at Kingsthorpe GC. 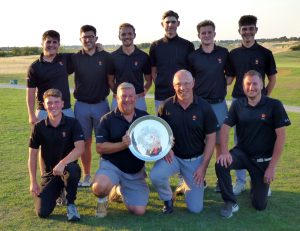