Callum Farr (Northants County) will take a lot of confidence from his brilliant run in the 2018 English Men’s Amateur Championship after he reached the semi-final, before eventually losing on the first extra hole to Joe Long (Lansdown).
After claiming 13th spot in strokeplay qualifying with scores of 67 and 74 at Hesketh GC and Formby GC respectively, Farr beat Mark Hyde (Southport & Ainsdale) 3&2 in the opening KO round.
The 19-year-old won his next match on the 18th hole against David Parsons (Sudbury) before ousting top seed Samuel Rook (Lindrick) with a magnificent 3&2 victory in the last eight.
Although Farr, who turns 20 years of age this week, defeated Oliver Farrell (Evesham) 5&3 in the quarter-finals, he lost a tight battle with Long, who knocked out County team-mate Thomas Forster in the third round the previous day.
Robin Williams (Peterborough Milton) also made it through to the knockout stages, but after convincing wins against Harry Butler (Chigwell) and George Saunders (Meon Valley) he bowed out in the last 16 to Angus Flanagan (St. George’s Hill).
Fergus Robinson, Charlie Salter, Matthew Myers and Michael Farr (all Northants County) did not make the knockout stages. 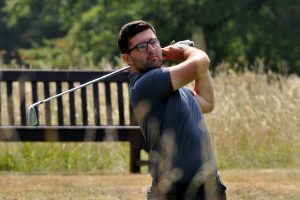