Leading Northamptonshire amateur golfer Ben Jones helped England become the 2018 Men’s Home Internationals champions as they ended the four-year reign of Ireland to reclaim the title at Conwy GC, Wales.
On the opening day, Northants County’s Jones recorded a 4&3 victory in the last singles match as the team thrashed Wales 11½- 3½.
In a much closer contest with Scotland on day two, the 19-year-old proved to be the difference between the two sides as he bagged a vital point in the morning pairs on the 18th, before anchoring the team to a one-point success with a 5&4 singles win.
Although the teenager was beaten in both his matches against Ireland on the final day, England still had enough to claim their first title since 2013 courtesy of 8½- 6½ success.
Team captain Gareth Jenkins commented: “This is fantastic. We’ve been so close over the last few years that to finally have the chance and to win is great. The team had an amazing fighting spirit and played some outstanding golf this week. 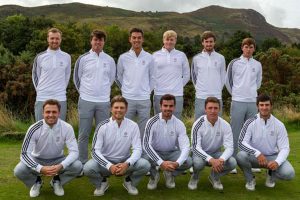