Oundle were crowned Ladies Cecil Leitch champions after a thrilling 4-3 success against Northants County in the final at Northampton GC.
In a match that was only decided by the last putt on the last green in the last match, Veronica Lyon had the pleasure of sealing victory for Oundle.
Pat Silburn gave Oundle, who knocked out reigning champions Whittlebury Park in the semi-finals, the perfect start by winning the opening tie 4&2.
County, who defeated Wellingborough in the last four, replied with a 4&3 success in the next tie, but Karen Johnson immediately restored Oundle’s lead thanks to a win on the 15th hole.
The topsy turvy pattern continued as County pulled level with a 2&1 victory, Sheila Homer took game five for Oundle, before their opponents made it three points apiece with a narrow victory in the penultimate tie.
With the title on the line in the remaining match, Lyon holed the winning putt for Oundle on the 18th hole.
The team dedicated their success to Oundle Ladies Club Captain Barbara Jenkinson, who suffered a serious elbow injury at the start of the season and has not been able to play golf since. 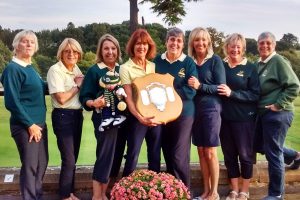