Wellingborough clinched the Hollingsworth Trophy for the second time in three years as they defeated Farthingstone 4-1 in the final at Overstone Park GC.
Although Simon Nightingale and David Summerfield recorded a big win for Farthingstone in game one, it was only after Tiger Adams and Richard Munns had strolled in with a huge Wellingborough victory under their belts in the second tie.
Jon Harris and Chris Howes were also in great form for Wellingborough in the final match, meaning a win in either of the other two games would secure a fifth Hollingsworth Trophy in the club’s history.
They didn’t have to wait too long for another moment of glory as Martin Dalton and Tim Veal sealed the team success on the 17th hole, before Richard Brown and Elliot Morgan capped a great day with a 2&1 win in the other game. 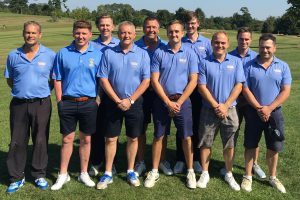