Kettering B will face Peterborough Milton A in the Junior League final after they both recorded 3-1 victories in the semi-finals at Rushden GC.
Ed Keech (5&4), Chelsey Sharp (6&5) and Ben Atherton (5&4) were in great form for Kettering as they defeated Overstone Park, whose only point came from Mark Stockdale.
Milton were always guaranteed one team in the final as the other last four clash pitted their A and C teams against each other in an intriguing contest.
With Kai Raymond and Emily Horsted sharing big wins, Morgan Cresswell edged the A team ahead with a win down the last, before Harry Smith clinched the team victory by beating Hannah Talbot.
The final takes place at Collingtree Park GC on Sunday, September 23rd. 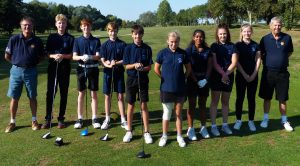