Group A
Max Smith and Lara Auld both enjoyed comfortable home wins for Northampton as they defeated Northants County A 3½-½.
Natasha Starcevic also bagged a point for the hosts, while the opening tie between Sophie Copson and Hattie Billson finished all square.

Group D
Kettering A recorded their second 4-0 home success this season with the perfect result against Peterborough Milton A.
Joseph Hyde (3&2), Joe Ingham (3&1), Austin Cooney (5&4) and in-form Ruby Smith (2&1) collected the points for the hosts.
It was a different story a few days earlier as Northampton B, who lost 4-0 to Kettering A in late May, partly avenged that defeat with a 4-1 home victory.
Ben Lavender (5&4) sent Northampton on the way as Katie Amos and Elise Warden secured the team’s first victory of the campaign with wins on the 15th hole. 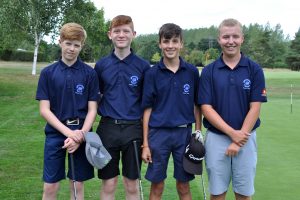