Peterborough Milton ‘A’ team were crowned Junior League champions for the second time in three years after defeating Kettering ‘B’ team 3-1 in the final at Collingtree Park GC.
Kai Raymond got Milton off the perfect start with a 4&3 success over Sam Underwood in the opening tie, before team-mate Morgan Cresswell fought back from a deficit at the turn to secure a half against Gracie Murray in game two.
Euan Herson also picked up a half in the next match against Kettering’s Chelsey Sharp, before Harry Smith wrapped up the Peterborough win with a 3&1 victory against Ben Atherton. 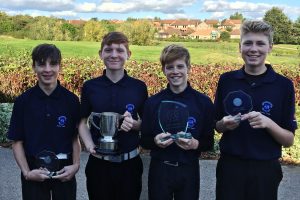