Jacob Williams (Peterborough Milton) and Hattie Billson (Northants County) collected the boys and girls gross trophies respectively in the 2018 NGL Junior Order of Merit Grand Final at Northants County GC.
Williams carded a round of 75 to finish three ahead of Ben Lavender (Northampton), while Billson’s score of 77 earned her a comfortable victory ahead of Ashleigh Critchley (Kettering). 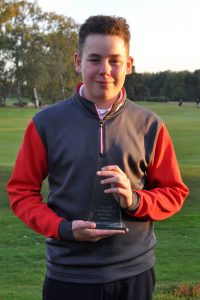 The net round of the day came from Oliver Godwin as the Overstone Park member fired a brilliant net 66 to secure the boys plaudits. Isaac Redding (Wellingborough) collected the runners-up prize. 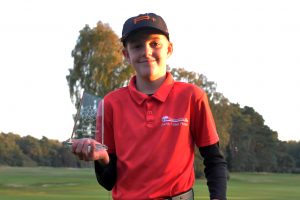 Northampton’s Katie Amos took the honours in the girls 18-hole net event by two from club-mate Leah Ribano, who grabbed second on countback from Gracie Murray (Kettering) and Baylie Pyke (Overstone).In the nine-hole Grand Final, Demi-Leigh Petruschke beat Overstone Park club-mate Cheynelle Bolton and Eleanor Hamilton (Northampton) by one in the girls competition.
Arguably the best performance of the day came from the youngest competitor in the Grand Final as Isaac Wakefield (Peterborough Milton) won the boys nine-hole event with 19 points. 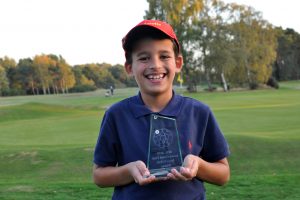 After coming back from a family holiday in the south west just to play in the tournament, William Nunn (Northants County) had plenty to smile about on the return journey after finishing runner-up.
With the competition doubling up as the Moulton College Junior Open, home club member Charlie Salter, who won the County Boys title this year, bagged another first prize as he finished ahead of club-mate Harry Oddy with a gross one-under-par 69.
On a day when all the Finalists received a magazine with a signature from one of the world’s top golfers, hats signed by the likes of Ryder Cup heroes Justin Rose, Francesco Molinari and Tommy Fleetwood were also won by Tyler Langwith (Overstone) and Theo Brown (Northants County).